March 09, 2017
I took the most glorious shower ever this morning. My face was starting to get pretty slick and shiny, the shower fixed all of that. I forgot to bring a razor so I'll probably grow out the beard for another day, but it's still manageable now. There's also the added bonus that the beard hair catches falling liquids (ie. saved for later).

My face swelling continues to grow southwards with gravity, but so far it hasn't been too bad. I can enunciate 'slightly' better now, it's an effort to move my lip muscles but I've been told that it will reduce swelling quicker.

Today is the first day I feel like I am just me with my wired mouth shut, being able to manage moving around by myself (some walks up and down the hotel hallway), feeding myself from condiment bottles. Bending over is still something I need to be cautious of, lest I re-open sinus blood drips, but it hasn't happened yet today.

My coworker saw a photo on this blog and described my face as a hotdog, which he then built a graph off of.


I have a post-op phone call with the maxillofacial department. They told me in pre-op that I should be the one talking, so I'm excited to see whether they'll understand anything I say.

My mum has found her calling in authoritative feeding schedules, always pushing me to drink more and more calories. On the one hand I'm glad, because I do really need those calories. On the other hand, I feel like I can't argue back when she misinterprets some situation, it's a balancing act I suppose.

(Update 10:08am)  Finally alone for a couple hours. I drank a whole odwalla mango smoothie (watered down), which comes out to about 200 calories. I also drank 1 coconut water. And half a bottle of fruit punch. These condiment bottles are absolutely perfect because they hold 16 oz of liquid, have a nice tip that I can cut to whatever diameter I want, and most importantly, they have a cap that keeps from spilling during the several time's I've dropped a bottle by mistake onto my laptop. 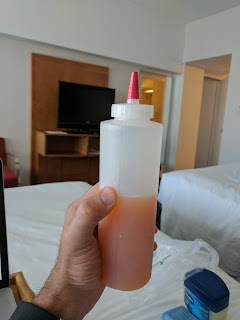 (Update 11:45am) I was feeling a little nauseous, so I've been doing laps around the room, that and the anti-nausea pill (dissolves in side of mouth) have helped me feel a lot better. I've decided I can now sit on a chair and play on the laptop, I opened up the curtains, starting to feel a lot more normal now, besides looking like a hotdog.

(Update 1:11pm) Note to self, chicken stock is not the same thing as chicken broth. Stock tastes absolutely terrible. I am able to fill my own drinks now. The best thing though was replacing my own ice packs, I'm feeling way more self sufficient now!

(Update 2:56pm) Drinking vietnamese broth, this is mana from heaven. This is the first salt I've had in days! SO GOOD.

(Update 3:54pm) My lips are tingling. This supposedly means my nerves are regenerating. This is only day 2, I am wolverine.  In terms of loss of sensation, I highlighted the part of my chin that I still can't feel anything. Similarly I can't feel the gums of my upper teeth, or palate. There's some partial sensation of the gum on my lower teeth still though.
(Update 5:04pm) Tried shaving with an electric razor, did not go as well as I'd hoped.  Still, at least that glorious moustache is finally reduced some. 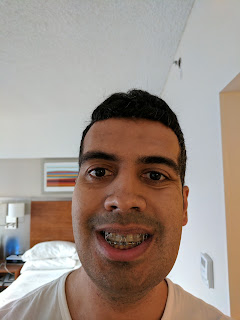 (Update 10:04pm) My nostrils have clogged up heavily, making it feel like i'm suffocating the entire time unless I force my mouth open and breath through the sides of the mouth (where the wisdom teeth used to be). This is exhausting. Lizzy has gone to buy some breathe-right strips to see if they'll help. I had used Afrin for the last time earlier in the day and it had done well, but didn't last long enough. Afrin shouldn't be used for more than 3 days in a row because otherwise one can get rebound congestion, so I'm stuck with saline nose spray and hopes that strips will save me. In the meanwhile, I have two straws pushed on either sides of my teeth helping hold my mouth open for breathing.