April 03, 2017
A few friends and I were discussing how a recent article on a shooting in the city was bereft of details. The article said someone was found shot in the afternoon. I was bored enough to create a potential story for it.


The guy who died was actually a drug kingpin in the middle of a critical deal to create a new product called Gold Leaf on the PCP market. His trademark came about from tiny white scar above his upper right temple in the shape of a leaf.

He got that as a 6 yr-old child, when he was attacked by a rottweiler at the 'daycare', which was also a front by the local gang for laundering blood money raised from an underground dog fighting ring.

The child grew up with an understandable but irrational hatred of rottweilers. So from that moment in daycare he promised himself that he would never let himself be hurt again. He studied hard in secret, training in self-defense and concocting powdered drugs. Using subterfuge and purposefully bad batches, he killed off all those who opposed him and become one of the top criminal chieftains of the tenderloin.

Once there, he followed through on his 6-yr old promise, and let it be known that no rottweilers are allowed in the tenderloin, anybody found with one would have an eye taken out.

It took 2 years, and several eyes, before there was not a single rottweiler to be found in the tenderloin. Eyepatch sales were through the roof. This was all part of his plan, as he had founded an eyepatch company in preparation for this. Through this money, he became The Kingpin.

But, on this fateful day, with the kingpin lying in a pool of his own blood. He looked up at his killer.

What was the last thing he saw? A girl, with one eye. She told him, "My name is Inaga Montoya, you killed my rottweiler." She turned her back and left into the setting sun. A heavy gust shook the area, the trees letting loose a flurry of leaves, the rays of the afternoon sun lighting them up as they fell around the body of the kingpin, a bed of golden leaves. 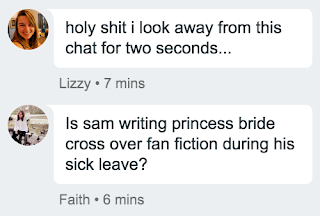 I have too much free time on my hands. Related to my surgery, my jaw now can open at a comfortable 1.5 fingers wide. We're making ramen for dinner, chewing is getting much easier now, because my teeth are actually starting to close together! I'm getting better contact on my right side, and some is starting to form on the left.